Introducing shrimp ‘n’ waffles. Tender shrimp in a maple sriracha aioli on top of, wait for it…Red Lobster’s Cheddar Bay Biscuits (affiliate link). It’s a whole new way to “hack the box” – instead of following the biscuit recipe on the box, stir in ingredients more commonly used to make standard waffles, like milk and whisked eggs.

The result is something truly spectacular! One box of biscuit mix made about three waffles and by the end of the night, every spec of shrimp ‘n’ waffle had been consumed. Had I known about this in my college days, this may have beaten out chicken waffles sandwiches when it came to food to fulfill the munchies. Now that I have this option, I may never make chicken waffles again!*

(*JK, I will still love chicken waffles, but shrimp ‘n’ waffles are a close contender!) 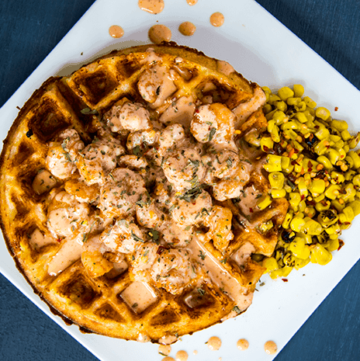 Keyword biscuit, cheese, shrimp, waffles
Tried this recipe?Let us know how it was!