Ever have one of those nights where you just dig whatever you can find out of your refrigerator and hope for the best? I like to call it “what can I make from what’s in my fridge door” since many ingredients hang out there for awhile, neglected.

This evening I was fortunate enough to find a handful of loose garlic, some cherry tomatoes, half a lemon and some extra spicy hot sauce we picked up in Mexico. Tucked in the back of my fridge were various choppings of onions and peppers. In my cabinets I found a bottle of sherry and open capellini noodles. I’m qualifying this dish as a scampi because, well, it has shrimp and butter in it and apparently, that’s all you really need to say you’ve made shrimp scampi.

First, melt the butter and quickly fry the shrimp until pink and beginning to brown, about thirty seconds on each side. Set the shrimp aside when they are done cooking but leave the remaining butter in the skillet.

Toss the onions, garlic, and peppers into the skillet with the butter and saute until the vegetables have softened. Add the tomatoes last, after the other vegetables have been cooking for a few minutes, sine the tomatoes will cook the fastest. While the vegetables are cooking, prepare the noodles according to the instructions on the package. I just happened to use capellini noodles in my dish, but regular spaghetti noodles or fettuccine noodles work just as well.

Add the sherry to the skillet to deglaze the pan, then season with salt and pepper. Add a dash of extra spicy hot sauce and stir it in well! If you are going for a milder scampi, just use red pepper flakes instead of a spicy sauce.

Stir the shrimp into the sauce then add a half cup of the pasta water. Drain the rest of the water from the noodles, then add them into the pan as well.

Use about half of the Parmesan cheese in the actual dish, but reserve half to sprinkle on the top of your scampi when ready to serve. Squeeze the lemon juice over the noodles and stir it all together.

I was able to make my scampi in about fifteen minutes (though I admit, pausing to take pictures every minute or two might extend that time). Pasta dishes are great for weeknight meals because they are so versatile, like spaghetti carbonara, and take very little time to cook up. The best part? It can all be done in a single pan! (Hint: don’t cook the capellini separately, just add extra water!) 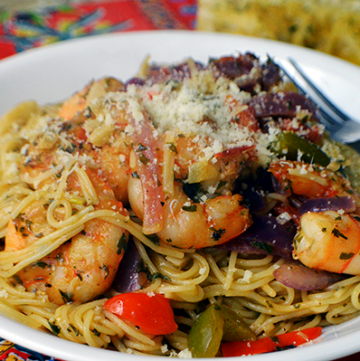 The Starving Chef
I'm qualifying this dish as a scampi because, well, it has shrimp and butter in it and apparently, that's all you really need to say you've made shrimp scampi.
Print Recipe Pin Recipe
Prep Time 5 mins
Cook Time 10 mins
Course Main Course
Cuisine Quick & Easy, Seafood
Servings 4

Keyword noodles, pasta, shrimp
Tried this recipe?Let us know how it was!