I’m a sucker for all things sous vide, but if there’s one thing I never want to cook the traditional way again in ispork chops. Seriously, sous vide is the way to go with these things!

I often buy whatever meat is on sale and generally end up with thin cuts of pork that become dough and dry if overcooked for more than a second. With sous viding, the pork remains pleasantly tender and moist all the way though and you don’t even have to marinade them. Just season with some salt and pepper, add the pork chops to a vacuum seal bag, and place in a pot of water with an immersion circulator for 1-6 hours. I slapped a quick sear on mine at the end, just for looks, then plated in on a bed of sous vide butter spinach and mushrooms. 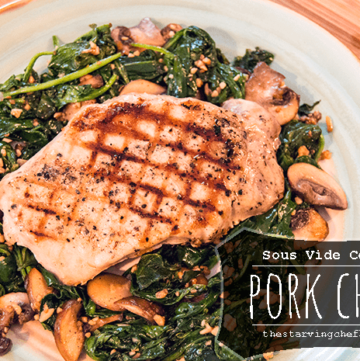 FOR BUTTER SPINACH AND MUSHROOMS:

Keyword mushrooms, pork, sous vide, spinach
Tried this recipe?Let us know how it was!