Hola amigos! Today was one of those mornings where I just didn’t want to cook anything complicated, and I especially didn’t want to clean up a huge mess afterwards (as I tend to use what feels like every dish in the kitchen when I cook).

I decided a ‘one-pan breakfast’ was the way to go to. And with this week’s challenge being Mexican themed, huevos rancheros sounded muy bueno.

If you’ve been following by blogging journey, you may know I have a thing for chorizo. I used some extra spicy links with the casing removed. I also rounded up a couple ‘Mexican themed’ canned goods that had been sitting in the back of my cabinets taking up space to really round out the meal.

I began by browning the chorizo, then added the bell pepper, which I found hanging on the backside of one of my balcony plants, perfectly orange and ready to chop up for this meal. Then I added the garlic and cherry tomatoes, and sautéed until the tomatoes started to shrivel.

Next, I removed the chorizo, tomatoes, and peppers from the pan and set aside on a plate while I chopped up the potatoes. Do a quick wipe out of the pan, and add 2 tablespoons of olive oil and place the pan back on the stove over medium high heat.

Then add the canned corn and canned tomatoes – but don’t drain the liquids! We want all of that goodness in the pan!

Open the taco rice and shake evenly into the pan, stirring it into the vegetables. Then add 2 cups of water and bring to a simmering bubble.

When the rice has absorbed most of the liquid, about 7-10 minutes of simmering, add the chorizo and peppers into the mix. Stir the chorizo into the rice and reduce the heat to a medium low.

Use a large spoon to arrange 4-5 large scoops of refried beans on top of the rice and chorizo. Make divots in the beans to hold the eggs.

Crack eggs on top of each pile of refried beans (or right onto the rice if you’d like!) and pop into a preheated oven for 15-20 minutes.

When the eggs are ready, they should be just slightly wobbly on top – or for a less runny egg, wait until the tops are completely firm. I however, enjoy my eggs on the runny side I’ll take a little wobble.

I used a large spoon to go directly beneath each pile of refried beans to lift each egg from the pan and they all stayed together perfectly.

Serve the huevos rancheros on top of tortillas with an avocado sour cream (recipe coming soon!) and cheese. 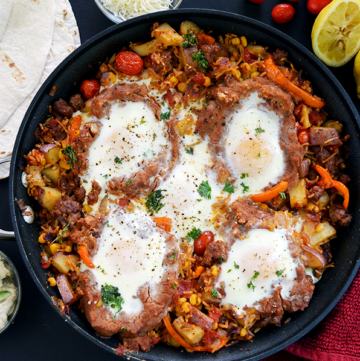 Keyword corn, eggs, potatoes, rice
Tried this recipe?Let us know how it was!