My boyfriend has been pestering me for some peanut sauce for a few weeks now, so I finally broke down and made him some. I am not a huge fan of anything peanut flavored except for things that I’ve grown to associate peanut butter with, like cookies, or PB&J.

The good news is, I think I’ve found a peanut themed dish that I actually enjoy eating as much as I enjoyed cooking! I was almost surprised by the simplicity of this dish, considering it only required a few ingredients such as peanut butter, soy sauce, and garlic. I added a touch of sriracha and lime for a hint of heat and acid as well, which I initially felt weird about mixing into my PB, but it turned out absolutely incredible.

Just whisk together the peanut butter, sriracha, lime juice, garlic, cilantro, and honey until a thick sauce forms. My sauce was perhaps a touch too thick, so feel free to add a tablespoon or two of olive oil to help make the sauce a little runnier, if that’s how you like it.

I marinated my chicken breasts in half of the peanut sauce for about 2 hours prior to cooking them. Since I was in a hurry (and starving) I decided to do a ‘quick cooking’ method on the chicken, which included searing the chicken on both sides before popping into the oven for about 15 minutes.

When the chicken is cooked through, spread the remaining peanut sauce onto the tops of each breast. I served mine alongside some orange noodles, which made for a perfect spicy companion. 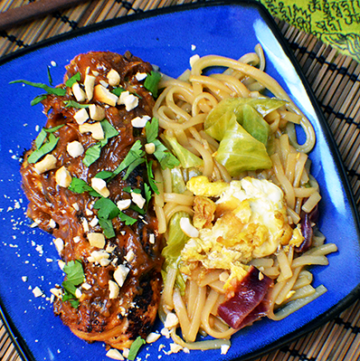 Keyword chicken, noodles, peanut butter, spicy, Thai
Tried this recipe?Let us know how it was!