Potatoes on pizza is definitely not a new invention, but it’s certainly a delicious one. It’s hard to go wrong with pizza; whether it came frozen or made fresh, it’s pretty much always at least a little bit awesome…because it’s pizza.

If you are looking for a more casual dish to a holiday affair, look no further than this sweet potato pizza with spicy chorizo, honey, and goat cheese. It’s uniquely tasty.

This pizza is made with a sweet potato, garlic, and habanero sauce for the base and is then topped with fresh squash, tomatoes, mushrooms, bacon, sausage, honey, and sunflower seeds. It sounds like a lot, but by using a store bough pizza dough, this recipe is ready in just a few minutes.

Start by frying the bacon and then in it’s grease, browning the spicy chorizo. If you are into milder flavors, use a sweet or maple sausage instead.

Remove the crumbled chorizo from the pan and saute the mushrooms (and I added some onions last minute) in the remaining bacon fat until the onions are translucent and the mushrooms have lost their moisture. Then set the veggies alongside the sausage and bacon.

Meanwhile, in a small blender, mix together the sweet potatoes with about 1/4 cup of the syrup they come in and the habanero, garlic, parsley, and half of the sun flower seeds until a smooth sauce forms. Using one habanero gives it just a hint of heat once it’s cooked, but if you don’t want the sauce to be spicy at all, just leave it out. Mine was just enough to have a flare of heat at the very end that played along with the sweetness of the honey drizzle very nicely.

Then in the heated pan, melt two tablespoons of butter and add the sauce. Stir until fragrant and the butter has been incorporated completely and then remove from the heat.

As the sauce cools, use a mandolin slicer to thinly slice the yellow squash and tomatoes.

Finally, roll out the dough on a preheated pizza stone. Spread the sweet potato sauce to the edges, leaving enough room for a crust, then top with the tomatoes and squash first, followed by the chorizo, bacon, and sauteed veggies.

Top with feta or goat cheese, then bake for 15 minutes, or until the crust is golden and the cheese is beginning to melt.

When the pizza is cooked, drizzle honey from side to side and top with fresh parsley.

Cut the pizza into bite sized squares and serve as an appetizer, or cut into strips for a full meal. No matter how you decide to eat it, it’s pizza, so you know it’ll be delicious! 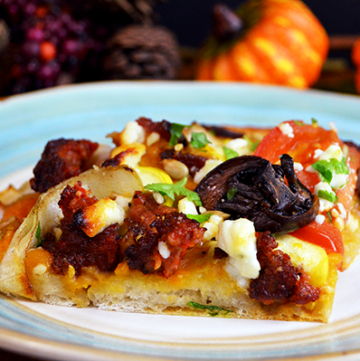 Keyword goat cheese, honey, spicy, sweet potato
Tried this recipe?Let us know how it was!