Back in my early blogging days, I created a simple recipe for Angry Orchard pork chops and it quickly became one of my most popular posts. While those chops are good, I’ve been wanting to revamp the recipe, just like I revamped my blog, for a few weeks now.

I decided to kick things up a notch this time around create an entirely new recipe, from (almost) the same ingredients.

I started by brining my pork chops in a large baggie with the entire bottle of Angry Orchard, apple cider vinegar, three tablespoons of olive oil, and a touch of salt. I let them soak in the fridge for about 2 hours, then brought them to room temperature prior to cooking.

Whisk together the other dry ingredients with the sriracha until a thick paste forms, then chill until ready to slather all over those pork chops.

Use a grill (or grill pan) to sear your chops on both sides, turning 90 degrees after 2-3 minutes to achieve those perfect grill lines.

After you flip and rotate, spread the sweet and sriracha sauce on top of each pork chop.

I then popped my pork into the oven at 375*F for 10 minutes while I wrapped up the rest of dinner, which was tomato basil pierogies and broccoli. It’s all I had in my freezer.

Remove the pork chops from the oven and let rest for a few moments. If you let the pork rest for at least 5-10 minutes, it’ll retain soooo much more moisture than if you were to serve and cut right away. Timing matters, people! 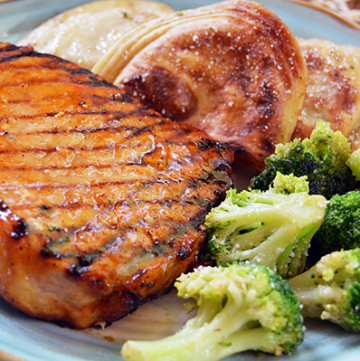 Keyword apples, pork, sweet & spicy
Tried this recipe?Let us know how it was!