One of the most adorable creatures in the Avatar universe has to be the pentapus, which is the five tentacled sibling of the real life octopus. After cleverly using pentapusi (I suppose that would be the plural form of pentads?) Sokka is able to free the captured city of Omashu by tricking the Fire Nation guards into releasing all of the trapped citizens by feigning “peta-pox.” The suction cup marks left by the pentapus on the skin of the ‘sick’ inhabitants fooled the guards into letting the entire population merely walk out the front gate, much to the Governor displeasure (especially considering his child happened to accidentally be ‘kidnapped’ by those leaving the city).

Because of the adorableness associated with pentapus, I’d like to hope it was not their tentacles that were used in the Northern Water tribe’s famous tentacle soup. Fortunately, pentapusi (????) don’t exist in real life and squid are just ugly enough for me not to feel bad about consuming them – which is why squid are used in my take on this Water Tribe classic.

It’s common knowledge, if you are immersed in the culture of the Avatar universe as I am, that there is a heavy influence from real cultures, particularly from Chinese, South Asian, and Indigenous societies. The Water Tribes, being located at the North and South poles, take their influence from Inuit and Eskimo cultures with little aboriginal hints here and there (think: Sokka’s boomerang).

As a culture that relies heavily on the sea, it’s only appropriate that a staple in their culture would be a seafood soup of sorts, with a hint of Asian cuisine sprinkled throughout.

I was able to find some already cleaned squid at my grocery store, so I just sliced the body into rings and left the head (and tentacles) intact. Sautee the squid alongside the shrimp, and any other seafood you might be using, until it’s tender and the shrimp is nice and red.

Next sautee the peppers and mushrooms with the garlic and ginger in a touch of butter or ghee until softened and beginning to brown. Sprinkle in the chile peppers.

Add a dash of fish sauce to the pan along with a few teaspoons of red curry paste and stir until combined. Let the mix simmer until reduced by half.

In a separate soup pan, add the chicken broth and then add the pepper and mushroom mix. Let the soup simmer for several minutes before tossing in the seafood and letting simmer for an additional 3-5 minutes.

Serve the soup hot and garnished with basil and cilantro.

Now go free the boy trapped in the iceberg!

Restore your honor with this Fire Nation Turkey-Duck. 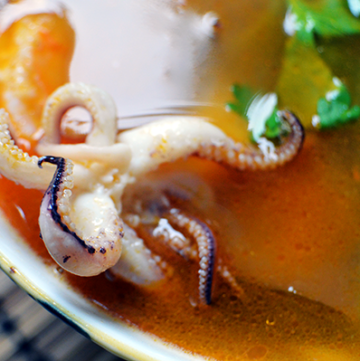 Keyword calamari, shrimp, soup, squid
Tried this recipe?Let us know how it was!