I’ve been practicing for Thanksgiving and it’s been a ton of fun. No wonder my favorite holidays revolve around food – with so many fun new recipes to try and combine, it’s a wonder I don’t eat Thanksgiving-esque meals year round. But alas, I must contain myself (or else I’d probably weigh 400 pounds).

For tonight’s dinner, I realized I had an extra pie crust laying around and wanted to initially make chicken pot pie. Then I remembered I had ground turkey. And stuffing.

What started as a simple idea for an all inclusive Thanksgiving pot pie became a desperate attempt to clean out some old ingredients to make room in the cabinets for more food.

I chose what was close enough to cream of potato soup for the filling base, any sort of cream of [insert vegetable of choice here] soup will work. I also dug out some frozen veggies and celery to make for a hearty pie filling.

I had ground turkey on hand, but using leftover turkey meat from any occasion will definitely work. Using the ground turkey gave my pot pie a bit of a shepherd’s pie feel.

Saute the leeks, onions, and frozen veggies with some butter until they are beginning to brown, then add the cooked ground turkey back into the pan.

While I was cooking, I also soaked the corn bread mix in some chicken broth – essentially, if you are using a boxed variety, follow all the steps on the side of the box up to actually heating the stuffing up.

Then pour the turkey and vegetable mix into the pie pan and distribute it evenly across the bottom.

Next, open the can of creamed potatoes – I had a chunky kind on hand that worked well – and spread it across the top of the turkey all the way to the edges of the pie crust.

Finally, gently press the moistened stuffing into the pie crust on the turkey and potatoes, to form a crust-like covering across the top of the pie.

I dotted my stuffing with butter, as a final touch, before popping it into the oven and baking it for 25 minutes. The top of the stuffing should be nice and crispy. If you let it cool long enough, I’m sure you could really cut the pie into slices, but I was way too impatient to wait, so I dug right in. 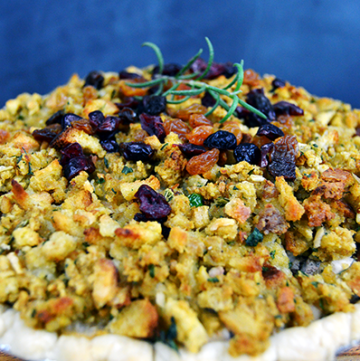 Keyword pie crust, stuffing, turkey
Tried this recipe?Let us know how it was!