With recent crazy weather in my hometown, I thought these potatoes were especially relevant to this week’s challenge of concession foods. They’re not only crazy easy to make, but they can be served alongside other foods-on-sticks like these equally as easy corn dogs!

All you really need for this recipe is potatoes and a deep fryer (or even just a few inches of oil will suffice) and whatever spices you want to flavor it with. I chose Hungarian paprika for some kick, but also sprinkled on some garlic and onion power at the end as well. As I was making these potatoes, the weather in my current town took a turn for the worse as well, strangely enough.

Then spiral cut your potatoes! Keep the centers for another recipe if you insist.

I then split each potato into two spirals, then skewered each about half way up the skewer.

Deep fry for 2-3 minutes, or until crispy. If you don’t have a deep fryer, just bring a few inches of oil up to 350*F in a large skillet, then rotate the potatoes in the oil to cool them through!

Serve alongside some other deep-fried goodness like corn dogs. 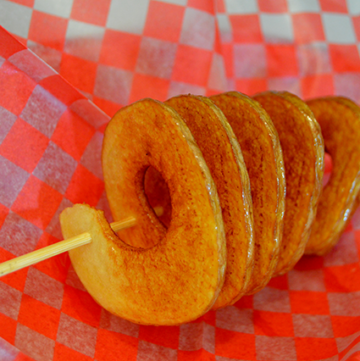 Keyword fair food at home, potatoes, skewer
Tried this recipe?Let us know how it was!