July 31st is Harry Potter’s birthday – and we’ve been celebrating all week here in the Starving Chef’s kitchen. Harry’s birthday signifies much more than the anniversary of his entrance into the world of magic – it’s also J.K. Rowling’s birthday too! Happy Birthday Harry & Jo!

Throughout the books, Harry jumps at any chance to enjoy treacle – his favorite dessert. But what is treacle exactly?

Treacle tarts have a chewy filling that is made from breadcrumbs. Whoever thought of turning breadcrumbs into a tasty caramel-esque filling deserves a Medal for Magical Merit for sure.

Treacle pudding was frequently served at the Great Hall as dessert, and truly if you don’t have pie crust, you can add some extra syrup to the breadcrumbs to achieve a more custard-like consistency and enjoy with a spoon. Harry Potter would eat treacle no matter how it was served – I’d like to think he would have also requested it for his birthday. 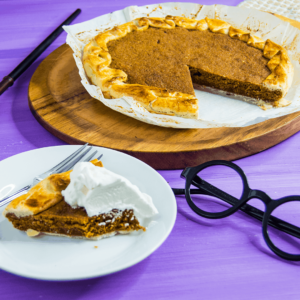 Keyword Harry Potter, tart
Tried this recipe?Let us know how it was!