This week we are exploring the cuisine of Westeros, starting in the ruins of Harrenhal.

If you aren’t caught up on the most recent season of Game of Thrones – BE WARNED! There’s gonna be BE OL’ SPOILERS in this post!!

Tywin Lannister was once one of the most powerful men in the Seven Kingdoms. As Hand of the King to Joffery, he practically ruled Westeros from behind the curtains – but it was likely no one but him knew the real turmoil King’s Landing was in; no money, no food – and now, no king.

And with Tywin’s untimely demise by Tyrion, now no one in King’s Landing truly knows the scale of descruction that will be reeked upon the city once Daenerys shows up with her dragons.

But until then, the free folk can dream of simpler times – where oxtail stew was plentiful as it is delicious.

In season two of Game of Thrones, Ayra is taken captive by the Lannisters at Harrenhal, where she subsequently finds herself as a servant girl to none other than Tywin Lannister. Tywin doesn’t recognize Ayra, leading him to show her kindness by offering up his meal of mutton stew – but a kindness only shown, mostly because he doesn’t like mutton.

Tywin is an important figure at Harrenhal, so its likely he would have had the kitchen prepare him something else to eat – but obviously being in Harrenhal, the goods probably weren’t as plentiful as they would be in Kings landing or Casterly rock – so the kitchen workers would have probably had to work with what they had on hand; offal and other spare bits and ends leftover from the Lannister army’s last meal.

If you’re lucky, you’ll be serving this stew to Tywin Lannister himself, and possibly picking up some secrets from the North while you’re at it. 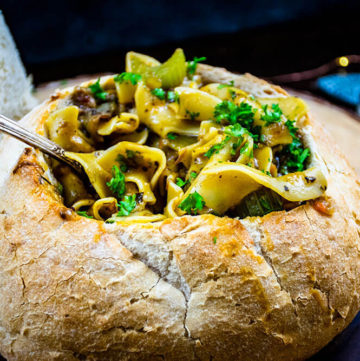 Keyword Game of Thrones, noodles, oxtail, soup, sourdough
Tried this recipe?Let us know how it was!