I’ve always wanted to explore the rolling hills of Ireland. Unfortunately, as I’m stuck here in Ohio, Saint Patrick’s day is about the closest I’ll get to experiencing anything close to authentic Irish cuisine.

While I may have never had the real deal, I’d like to think this whiskey pork and colcannon is close enough to at least be convincing.

Colcannon is a traditional potato and cabbage dish that can be served chunky or smooth. Some recipes call for pureeing the colcannon until smooth, but I prefer mine rustic and homestyle.

After eating this, you’ll be doing a jig and singing “Kiss me, I’m IRISH!” 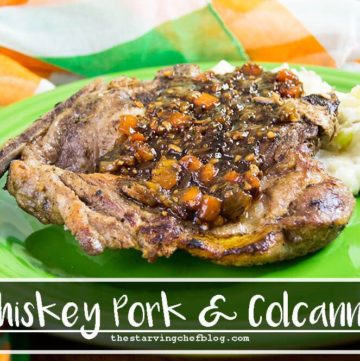 Keyword cabbage, pork, potatoes
Tried this recipe?Let us know how it was!