Winter is coming…in the form of ice cream.

If you aren’t caught up on the latest season of Game of Thrones – THERE’S GONNA BE BIG OL’ SPOILERS IN THIS POST! You’ve been warned!

The White Walkers have breached the Wall and are heading into Westeros. It’s official. Winter is HERE and very much alive…er…dead?

What the White Walkers and the Night King actually want is STILL a huge mystery – we now know where they come from but not why they are coming.

If you can’t tell, I’m a hard core Game of Thrones theorist – and I believe the White Walkers want more ice cream!

We know from season seven that the Night King, White Walkers and wights are now making their way south of the Wall, bringing all the snow and ice with them – as well as reanimating the dead as they go.

We also know that the Night King – and probably his White Walker cronies – have more than just the wights, giants, and undead polar bears on their side; apparently, they can also create magical ice spears that’ll kill…just about anything.

I have a theory that the Night King wants more than just the power of ice dragons and the trifles of men. I believe he is after their life blood – which also happens to make a delicious sauce to drizzle over ice cream.

Honestly, now I’m just even more convinced the Night King is on his way to my house for an ice cream social.

Truthfully, I don’t think we’re in for a happy ending to Game of Thrones – GRRM himself has alluded to one that is more ‘bittersweet’ than anything, leading many to believe the Night King will be the one sitting on the throne at the end of the series.

If only Jon Snow could send a raven to the Night King inviting him down for a bowl of ice cream, they could probably work out a deal to keep the peace of the Seven Kingdoms.

Regardless of who is sitting on the throne at the end of the show, one thing is for sure: this ice cream is slow churned to perfection, which is still faster than GRRM is churning out the final book. 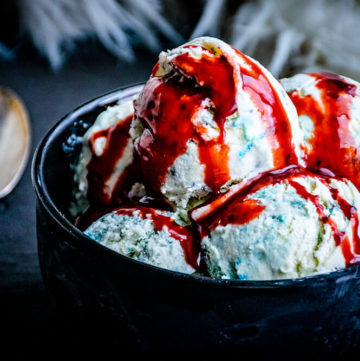 Keyword brown sugar, buttermilk, cream cheese, ice cream
Tried this recipe?Let us know how it was!