This recipe is particularly awesome since I already had most of the ingredients laying around the kitchen! I love playing “what’s in my refrigerator door” and making something out of whatever I can find there. This time around, I spotted my vegan nayonaise (which I guess is just like mayonnaise, they definitely taste the same) and some sour cream. And with our friend’s cookout coming up, I needed to whip up a quick side that everyone would enjoy – and somehow I was assigned potato salad.

Start by frying and crumbling your bacon. Let it cool. In a large bowl mix together the mayo, sour cream, cheese, half of the green onions, and the bacon.

Once combined, pop into the refrigerator to cool while you prepare the potatoes.

Cut your potatoes into chunks about 1 inch in size. Place into a large pot and cover with water, then heat the pot on the stove until boiling, for about 20 minutes, or until the potatoes are fork tender. Take care not to overcook, or else you will get a mashed potato consistency, not potato salad consistency. Strain and gently rinse with cool water. Let the potatoes chill for a few hours.

About an hour before you are ready to serve, combine the potatoes and the sour cream mayo mix.

I used a spatula to toss my potatoes – this was the best way I could think of to mix and not mash my potatoes. Cover the potato salad with foil then when ready to serve, garnish with the remaining bacon, cheese, and green onions. 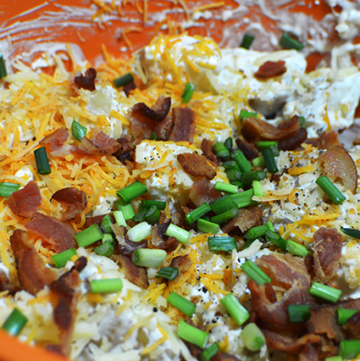 Keyword bacon, mayonnaise, potatoes
Tried this recipe?Let us know how it was!