Shell Cottage plays an important role in the Harry Potter universe. It’s the home of Fleur and Bill – and the burial place of another beloved character.

It’s at Shell Cottage where Ron went for a long while after aburptly leaving Harry and Hermione on their search for Horcruxes. Fleur, while perhaps not well liked by Molly Weasley during their intial meeting, likely formed a close bond after the war ended and would bond over cooking for their families.

Pâté chinois is the French version of cottage pie or shepherd pie – both of which are popular English dishes served regularlly at Hogwarts.

Whether Fleur’s pâté chinois was influenced by her stay at Hogwarts during the Triwizard Tournament or she just intuitively knew that one of Harry’s favorite foods was shepherd pie, it’s certainly a non-magical way to soothe the soul.

One thing is for sure, the meal shared amongst friends at Shell Cottage before parting ways during times of trial and tribulations brought everyone together one last time before the Battle for Hogwarts. 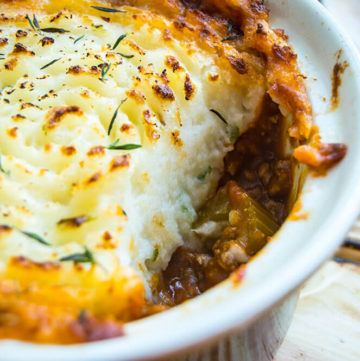 Note for Muggles: I recommend using store bought/premade mashed potatoes – the kind that you can find near the prepared foods in your meat department. I used Bob Evan’s garlic mashed potatoes. Cook the mashed potatoes according to the instructions on the box then stir in 2 tablespoons of butter until it has completely melted. Set aside and cool to room temperature.
Keyword ground beef, Harry Potter, lamb, potatoes, veal
Tried this recipe?Let us know how it was!