Today we are transporting our tastebuds back to the late 1950s for Passover – and we are dining with our favorite Jewish housewife and comedian, The Marvelous Mrs. Maisel.

Throughout the show, brisket is used as a bargaining chip to secure better open-night mic performance times for her husband. While it turns out Midge has all the talent, the brisket should be toted as the true key to her success.

This recipe is based on a popular 1950s recipe for Coca Cola brisket – it’s slow cooked for hours which transforms a normally tough and chewy cut of meat meat into delicious, melt-in-your-mouth brisket.

The 1950s are regarded as the golden age of Coca Cola – and using it to flavor savory meals was commonplace. when simmered for hours, the sugary syrup transforms into a rich caramelized flavor – adding depth and richness to an otherwise savory stew.

This ’50s inspired brisket can be served as part of a stew to influence the bookie to give you a better time slot for your stand-up routine or the slices can stuck into a bread roll and served as sandwiches while you are on the road to your next gig.

Or you can serve it to your Rabbi next Passover!

Do yourself a favor and check out The Marvelous Mrs. Maisel on Amazon Prime – this isn’t even a sponsored suggestion, I just truly really love this show! 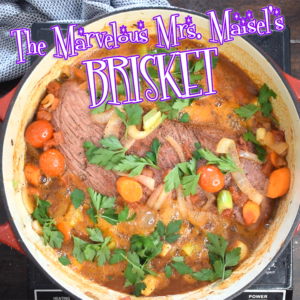 Keyword beef, brisket
Tried this recipe?Let us know how it was!