“I want the funeral feast to be the biggest the kingdom ever saw, and I want everyone to taste the boar that got me,” a fat king once said. If you’ve been watching Game of Thrones since the beginning, you’ll know exactly who that fat king was (but for the sake of first season spoilers I won’t name him here…as if the title of this post doesn’t give it away already).

Because of the relationship between House Stark and House Baratheon, I’d like to think this delicious rib feast was a variation of the whole boar that was roasted at the king’s funeral. “Apple in its mouth, skin seared crisp. Eat the bastard. Don’t care if you choke on him. Promise me, Ned.”

For my rendition of the boar, I used pork ribs and braised them for about an hour to lock in all of the tender juiciness. For the marinade and sauce, I ended up using regular white onion instead of the pearl onions featured in the image above. The spices are influenced by the differences between Winterfell and King’s Landing – sage and thyme represent the cold north while the paprika and red pepper flakes come from the warm seaside kingdom. Use wine fit for a king, red or white.

Sear the ribs in a skillet over high heat until all sides have been browned. Each side should only take a few seconds to brown so you’ll have to move quickly. You want a good sear that doesn’t cook all the way through the meat to the bone.

Set the seared ribs aside, then use the same skillet over medium heat with an additional drizzle of oil to saute the onion and whole cloves of garlic.

When the onions and garlic have started to caramelize, turn up the heat and add the wine, apple cider vinegar, and herbs and spices.

Let the sauce reduce for about fifteen minutes, then place the ribs back into the liquid. Be sure to flip occasionally so the ribs cook through evenly.

Simmer over medium to medium low heat for about one hour, until the ribs have cooked through and the meat is falling off the bones.

When the ribs are ready, remove the bay leaves from the sauce, then drizzle the sauce over the ribs when serving.

Honor the friendship between the Starks and the Baratheons by eating a root medley from the Stark’s root cellar. Serve alongside an extra strong flagon of wine – but don’t tell the king. 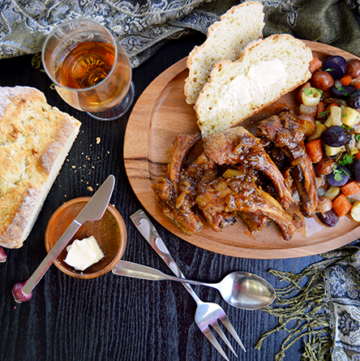 The Starving Chef
For my rendition of the boar, I used pork ribs and braised them for about an hour to lock in all of the tender juiciness.
Print Recipe Pin Recipe
Prep Time 40 mins
Cook Time 1 hr
Total Time 1 hr 40 mins
Course Fictional Feasts
Cuisine Game of Thrones
Servings 8

Keyword Game of Thrones, pork, ribs
Tried this recipe?Let us know how it was!