All the deliciousness of homemade cannolis, with half of the effort – you can even buy unfilled cannoli shells or even pieces of waffle cones instead, if you are feeling super lazy or extra hungry. The dip is good on just about anything sweet too!

I made my cannoli shells from scratch, because I got some cannoli tubes in my stocking this Christmas. And never one to turn down the opportunity to make something new, I of course had to test out the tubes over my Christmas break.

Don’t worry if you don’t have cannoli tubes, you can make your own from foil if you are truly determined to make your own cannoli shells. I’ve seen unfilled cannoli shells in the bakery of my local chain grocery store too, or if all else fails, use pieces of waffle cone or cinnamon pita chips. What’s important here is the cream cheese and ricotta dip!

And of course, I forgot to feature in the pic the most important ingredient on the list: ricotta cheese! It’s what truly makes this a cannoli dip, as ricotta cheese is the base to cannoli filling.

To start with the cannoli shells, make a crumbly dough from flour and cold, chopped butter. Add in some egg yolks one at a time, until they are totally stirred in. Then pour in the marsala wine in a steady steam – it’s helpful to use a stand mixer to make the dough.

Stir the dough until it no longer sticks to the sides of the bowl, then tip out onto a floured surface. Use a wooden rolling pin to roll the dough to be about 1/8th inch thick.

I used a mason jar ring to cut the dough into perfect circles, but if you don’t have mason jar ring or a circular cookie cutter that’s about 3×3 round, you can also use a glass or eyeball it with a knife.

The hardest part about making cannolis at home is getting the oil temperature just right, especially if you don’t own a deep fryer. As you can clearly see, it took me several tries to get the cannoli shells color, size, and texture just right. Expect a few mess ups if it’s your first time too – the shells will open if not sealed correctly and quickly burn if not watched closely. Once you get it right, however, it’s smooth sailing from there on out! Just be super careful removing the cannoli shells and tubes from the scalding hot oil. The metal tubes will also be super hot for about ten minutes after frying.

But once everything is all said and done, you’ll wind up with a pretty good amount of cannoli shells! I let mine dry out completely overnight. The next morning, I used a super sharp knife to cut the shells at an angle for optimal dipping.

It’s best to make the filling ahead too, as it will take some time to fully set and firm up. I mixed mine together and then popped it in the freezer for about two hours to speed up the process – ideally, let the cannoli dip chill for at least eight hours in the fridge to be fully chilled through.

I lined a bowl with plastic and chilled until firm, then placed the rounded dip into a fancy serving bowl – but that step is totally optional!

The cannoli shells cut at an angle are the perfect vessels for transporting the sweet ricotta cheese filling to your mouth – as much or as little as you want. The shells are pretty tasty on their own as well. The dip can be used for anything from cannoli shells to fruit, graham crackers, waffle cones, cookies and more!

A quick special announcement – the Starving Chef’s kitchen has gained a new pantry assistant: Luna! Theo Burrito maintains his head role as head sous chef, through Luna has discovered her loveeee for taste testing! My kitchen and heart have become just that much fuller. Welcome to the family, Looney Tuna ???? ???? 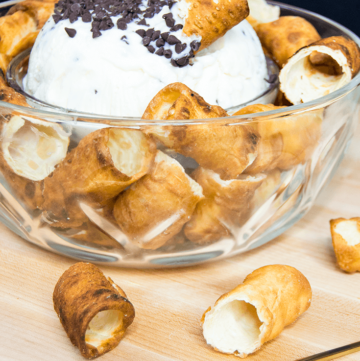 Keyword cream cheese, dessert, dough, ricotta
Tried this recipe?Let us know how it was!