Futurama has been one of my favorite shows since I was like, 12 so I thought it would be appropriate to make one of the fictional foods I’ve always wanted to taste for myself.

Today we’re blasting off to the future to taste test some of the tastiest tidbits in the entire universe.

Discovered on an M-Class planet during a mission to find roddenberries, Popplers quickly became the most popular snack on Earth, thanks to some help from Fishy Joe’s.

However, it is quickly discovered that Popplers are not only alive and intelligent, but they are also the infantile version of Omnicronians from Omicron Persesi 8.

And it wasn’t until Lrr and Ndnd threatened to eat one human for every poppler consumed – a total of 198 billion – that the consumption of popplers came to a halt. Even in the 31st century, there aren’t that many humans in the entire universe, let alone on Earth.

So the result was a ban on selling popplers – despite how delicious they are.

But with this recipe, even Scruffy the Janitor would be impressed.

Making Popplers at home is easier than stopping the space time continuum from collapsing in on itself – and without all the icky the moral quandaries that come with eating a sentient being.

Sentience aside, these tasty Popplers deliver all the crispy crunchy goodness that you’d expect from popplers. plus, they are outright adorable – better eat them all before they can signal to the Omnicronians what our position is…

Popplers have been a bucket list recipe for me since I started my journey into fictional feasting. But I need your help on what fictional recipe should I cook up next? Send me your suggestions for your favorite fictional meals down in the comments below. 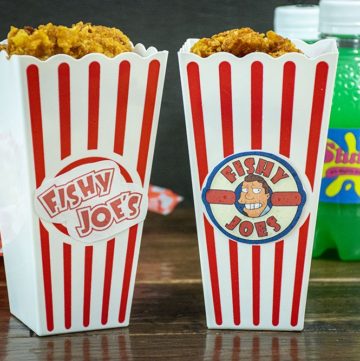 Keyword copycat, deep fried, shrimp
Tried this recipe?Let us know how it was!