I have had a fascination with India and Nepal for my entire life – mostly because my sister is from Kathmandu (for those of you trying to connect the dots, we were both adopted.) My family ordered Indian take-out just as frequently as we ordered Chinese or pizza; it was a staple in our home, so naturally, when I found out this week’s challenge was Indian food, I was pumped to make my all time favorite Indian foods: chicken birayni and naan.

If you’ve never experienced the amazingness that is Indian food, chicken biryani is a great place to start.

As with most Indian food, lots of fresh spices and vegetables are required. You might want to pick up some cardamom and saffron for an extra authentic taste of India. I was fresh out of basmanti rice, though I made due with some aborio rice and washed as much starch off as I could. Once the rice is washed, add it to a sauce pan with twice as much water and bring to a boil. Add a pinch of saffron to the water and a teaspoon of salt. Cover and reduce the heat to a low simmer, and do not remove the lid for 20 minutes.

Start by cubing up your chicken (or protein of choice) and browning in a skillet with a touch of olive oil. Once the chicken has cooked through, remove it from the skillet and set aside. In the same skillet, add another dash of olive oil, followed by the onions, tomatoes, banana peppers, and garlic. Saute until the onions are softened and caramelized.

Coat the onions with the curry, cinnamon, ginger, cardamom pods, and chile peppers. Whisk in the yogurt.

Toss in the chicken and golden raisins. Then stir everything together!

When the rice is done cooking, fold it into the biryani.

Continue to cook the biryani for an additional 5-10 minutes, or until the rice has started to crisp on the bottom of the pan. Serve alongside a heaping plate of naan, pudina chutney, and momos for an absolutely amazing Indian meal! 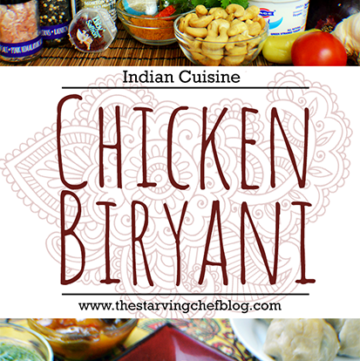 Keyword basmanti, chicken, Indian, saffron
Tried this recipe?Let us know how it was!