Find a man who will stare at you the way Tormund stares at Brienne while eating bread.

It’s GAME OF THRONES WEEK! And not just one week but TWO FULL WEEKS of GoT themed recipes are coming your way! Every weekday leading up to the premiere of the final season of Game of Thrones, we’ll be exploring Westeros through cuisine. From The Wall to Dragonstone, the foods and feasts of Westeros are abundant.

If you aren’t caught up on the most recent season of Game of Thrones – be warned! There’s gonna be BIG OL’ SPOILERS in this post!

Tonight we dine with the men of the Night’s Watch at The Wall; which, until last season, was the only standing defense between Westeros and the undead army of the Night King.

Rations are meager at Castle Black – and who would be surprised that far north? The Crows relied heavily on food they could hunt or cook with little effort in the low temperatures on The Wall.

One food that is easy to cook and requires few ingredients is beer bread – and if one thing is for certain, grain and dark beer are in no short supply in Westeros, given the fact that everyone seems to be drinking constantly.

Made from a simple dough without yeast, the bread is encrusted in black sesame seeds, poppyseeds and dried onion and garlic to help keep the bread moist even on the dryest and coldest of nights.

Breads like this one are also easy to carry in packs when venturing north of The Wall to hunt White Walkers and wights. It can be cut into thick slices or torn off in chunks and topped with a dab of salted butter for sustenance.

Whether or not The Wall will still be standing at the end of season eight is to be determined – though based off the season finale last year, there is little doubt that Castle Black probably won’t be around for much longer.

At least the Crows will have a healthy ration of bread to get them through the long march to Winterfell, where I assume they will inevitably go to stand behind House Stark while defending Westeros from the Night King. Only time will tell…as they say: WINTER IS COMING!

And now my watch has ended.

GET HYPED FOR THE FINAL SEASON OF GAME OF THRONES! 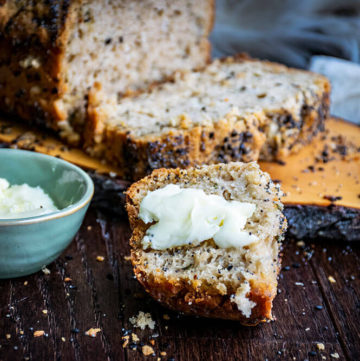 Keyword beer, bread, Game of Thrones
Tried this recipe?Let us know how it was!