I live for cold weather. I’m meant to dress in sweatshirts and jeans, and expect to be in a semi-hibernation-state from about October until April. Therefore, one of my go to meals during the fall and winter is SOUP!

There’s something especially warm and filling about a soup that mimics an American classic: the cheeseburger! Plus, only ONE POT is required for this dish, which means I’m spending less time doing dishes, and more time curled up in front of the fire.

To start, brown and crumble the hamburger meat, then remove it from the pot and rinse it. Wipe the pot clean with a wet rag, well enough to remove the leftover pieces of hamburger, but still leave a bit of the grease behind in the pot.

When the potato is mostly browned on all sides, add the chopped onion to the pan. Let the onion cook for several minutes. The onion should be starting to turn translucent around the edges before you add the cooked hamburger to the pot.

Sprinkle the flour into the pot and stir the ingredients well enough to cover completely. After a few minutes, the flour should be mostly absorbed.

I also snuck a couple chopped dill pickles into my pot at this point too, because I LOVE PICKLES. Especially Tony Packo’s spicy pickles and peppers!

While preparing the soup, chop a hamburger bun into cubes and spritz lightly with olive oil. Pop into a preheated oven and bake until crispy – these will be your ‘croutons’!

Pour the beef broth into the pot and toss in a handful of parsley. Bring the soup to a boil.

Let the soup simmer for several minutes, then add the cubed slices of cheese and heavy cream. Stir the soup until the cheese has completely melted, then remove from the heat.

I garnished my soup with croutons, a slice of cheese, an extra pickle and some sliced tomatoes.

Bring on the cold! This soup will certainly keep the chill at bay. 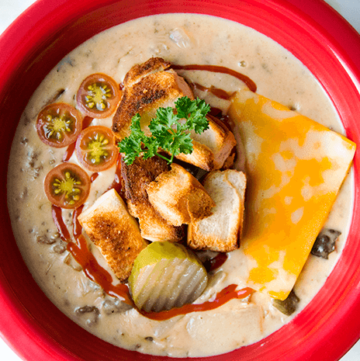 Keyword burger, cheese, hamburger, soup
Tried this recipe?Let us know how it was!