Step aside crock pots, there’s a new player in the cooking game: sous vide. While the method has been around for hundreds of years, it has recently been gaining popularity with home chefs who have access to fun toys like immersion circulators and vacuum sealers. No worries, if you don’t have an immersion circular, there are other ways to sous vide.

I received an Anova immersion circulator from Nick for Christmas and I have been itching to try it out ever since! I couldn’t decide what I wanted to make but I had picked up some chicken legs on sale so I decided to give it a go. Spoiler alert: this is my very first attempt at the sous vide cooking method, so I really have no idea what I’m doing. Tips and tricks are welcomed in the comments.

Here’s my set up: immersion circulator in a pot filled with water (and placed on a hot pad on a chopping block, for safety) and a food vacuum sealer my parents gave me along with bags.

I know one of the benefits of doing sous vide is being able to cook the food in a vacuum sealed bag with little to no marinade and seasoned with just a little salt and pepper. The moisture released from the meat is enough to keep the meat moist and tender. However, I couldn’t resist adding a couple tablespoons of butter and fresh parsley to the bags to cook with the chicken legs – you know, for science.

I sealed each bag with three drumsticks each, seasoned also with salt and pepper. Then I brought the immersion circulator to 165°F (which was awesome to do while sitting on my couch in the living room, with the Anova Culinary app) then popped in the vacuum sealed bags of chicken.

I let my chicken legs cook for about three and a half hours, though they were likely done in as little as one hour. I probably could have left them in for another hour, but we were so hungry at that point, I decided that three and a half hours was enough. Because the water temperature is maintained at a steady 165°F, the chicken has no risk of over cooking – it will only become more tender.

After reading the different ways to achieve a crispy skin with sous vide chicken, I chose to quickly flash fry the legs for one minute to achieve a delicately crisp skin.

While this may go against what a lot of people imagine when they think about sous vide chicken, it definitely was the most efficient way to fry the skin. I tried using a pan, and the skin mostly just stuck to the bottom and ripped right off the extremely tender chicken.

Finally, I poured a generous portion of our favorite barbecue sauce over the chicken wings, then let them rest for ten minutes until the sauce thickened up.

These legs were truly the best I’ve ever had in my life. The meat slid right off the bone with no effort and melted in my mouth. It was so incredibly juicy and tender, I think the immersion circulator might actually replace my crock pot (or even ~gasp~ my oven). I cannot wait to try it again – any requests for my next sous vide adventure? 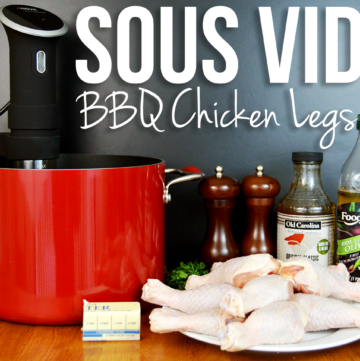 Keyword BBQ, chicken, sous vide
Tried this recipe?Let us know how it was!