Yamas! I think I’ve discovered the Zeus of pizzas with this incredible gyro mash-up.

I’ve been craving tzatziki sauce for a few days now and with the weekly challenge being pizza, I knew what I had to do.

With a simple dill tzatziki sauce, roasted tomatoes, and strips of gyro meat, this pizza is most definitely polí nóstimos. I topped mine with feta cheese, blackened artichokes, and even some fresh cucumber.

My dough came from a recipe in this 1 Crust, 100 Pizzas book I picked up sometime in college from a local thrift shop for only a few cents. This dough recipe has become my go-to pizza dough recipe for sure – the best part about it being it only takes about an hour to make.

I prefer to work my pizza dough by hand throughout the entire process, but feel free to use a stand mixer with a dough hook to speed up the process. Just begin by adding the flour to a bowl with the salt and olive oil until a crumbly dough forms. Then make a well in the center and pour in the lukewarm water with the dissolved yeast.

Stir until a thick dough is created, then use your hands and additional oil to knead and roll the dough into a ball. Place the dough ball in a greased bowl and cover with plastic wrap or a damp towel. Let the dough rise until it is doubled in size, or about an hour.

Meanwhile, slice your cherry tomatoes and split up the artichoke hearts. I drizzled mine with some olive oil, salt, pepper, and a sprinkle of parsley.

Then just pop the tomatoes and artichokes into the oven under the broiler for about 10 minutes.

Combine the dill, lemon juice, and Greek yogurt for a quick tzatziki sauce. Let the sauce chill while the dough finishes rising.

When the dough is doubled in size, punch it down and knead it a few times before putting it back into the bowl to rise for an additional 10 to 30 minutes. This helps to relax the dough even further for an extra crisp and fluffy crust.

For best results, you’ll want your oven to be super hot so preheat a pizza stone under the broiler on high for about 30 minutes, then set the oven temperature to 375°F and ‘preheat’ for an additional 30 minutes.

I rolled out and stretched my dough into about a 12×12 roundish shape. I don’t like a perfectly round pizza, it feel like it takes away from the real authentic taste. I’m also one of those people who thinks PB&J tastes better cut diagonally, rather than straight down the middle. True life.

If you don’t have a wooden pizza peel (aka one of those things that real pizza places use to slide pizzas into their stone ovens), you can either use a wooden cutting board sprinkled with corn meal and slide the dough off onto the pizza stone, or just prep the pizza as quickly and carefully as you can directly on the pizza stone.

I baked mine for about 15 minutes at 375°F on the preheated pizza stone, and then cranked up the broiler for the last 5-10 minutes to achieve a perfectly crunchy, yet soft, crust.

This is definitely one of my all time favorite recipes – I already bought more Greek yogurt so I can have some extra tzatziki sauce on hand in a heartbeat to make this recipe again, soon.

I made a little extra thin tzatziki sauce by mixing a couple tablespoons of the Greek marinade with the remaining tzatziki to drizzle over the top of my pizza.

Finally, garnish your pizza with some fresh, homegrown cucumbers. 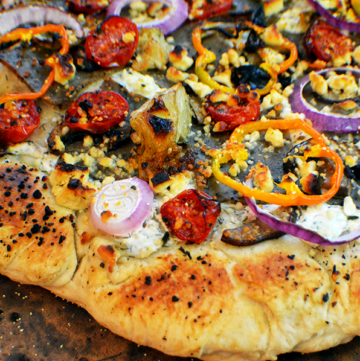 Gyro Pizza with a Tzatziki Drizzle

Keyword pizza, pizza stone, tzatziki
Tried this recipe?Let us know how it was!