Actually, I think this is a dish that the Cabbage Merchant would be particularly fond of, especially since it maintains the integrity of the cabbage. And while the Cabbage Merchant does finally turn in his cabbage cart and establishes Cabbage Corp – I’d like to think his life is still just as full as cabbages as it was in his early days of Avatar: The Last Airbender.

I’d also like to think that once the Cabbage Merchant was able to set aside his differences with Team Avatar, he would have found it in his heart to prepare cabbage steaks for Aang, Zuko, Katara, Sokka, and Toph after the creation of Republic City. He does, after all, owe his success to the freeing of the Earth Kingdom from the reign of the Fire Nation, as done by Avatar Aang himself.

The Cabbage Merchant was a simple man, and likely used simple seasonings on his food – which is why this ‘steak’ relies mostly on super fresh and crispy cabbage along with a touch of paprika, salt, and pepper. Plus heaping spoonfuls of garlic spread across the top of the cabbage…to make it less, cabbagey.

Start by creating a flat edge on the cabbage to make the cutting into slices bit easier. I used a relatively small cabbage so I only got about four, one inch cuts, from my cabbage.

Arrange the cabbage steaks into a greased pan and brush with butter or ghee.

Sprinkle on the salt, pepper, and paprika, followed by a thick spread of minced garlic.

Pop the cabbage steaks into the oven at 375°F oven for 20 minutes, then flip, spread more garlic on the tops of each steak, and return to the oven for an additional 20-30 minutes, or until the garlic is cooked and the edges of the cabbage have turned crispy.

Remove the steaks from the oven and spritz with a touch of balsamic vinegar – helpful when it comes to keeping those pesky flying lemurs away.

Serve with the highest honor to the Earth King and Bosco, or even King Bumi, if you’re looking for some eccentric dinner guests.

I suppose this may be the one instant where the Cabbage Merchant might yell: “YES! MY CABBAGES!” Cabbage steak can be served alongside an assortment of dishes, but I paired mine with some rooster-pig and scallops, and fresh corn on the cob (because it is summer after all!)

Warm up in the Southern Water Tribe with this spicy tentacle soup.

Taste the flavor of sweet, sweet honor with this Fire Nation Turkey-Duck recipe. 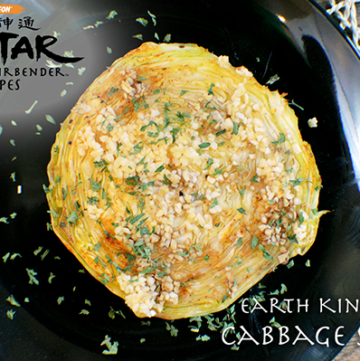 The Starving Chef
I think this is a dish that the Cabbage Merchant would be particularly fond of, especially since it maintains the integrity of the cabbage.
Print Recipe Pin Recipe
Prep Time 20 mins
Cook Time 1 hr
Total Time 1 hr 20 mins
Course Fictional Feasts, Side Dish
Cuisine Avatar: The Last Airbender, Vegetarian
Servings 4

Keyword cabbage, ghee
Tried this recipe?Let us know how it was!