Chicken. Bacon. Strata. Never have those words sounded so delicious. Ever since I made toads-in-holes for breakfast, I’ve had about half a loaf of sourdough bread just chilling on my counter-top waiting to be utilized. Then the other day, per another redditor’s suggestion to make a strata with all of the leftover bread, the idea to make a chicken bacon strata was born. Here’s my dinner take on a classic breakfast dish!

Lets get to it!

Begin by cutting up your bread into 1×1 inch cubes. Fry the bacon in small pieces until crumbly.

Then using some of the leftover bacon grease, fry your chicken.

While the chicken breast is cooking, combine the eggs, milk, and cheese together in a small bowl.

Cut up the chicken and combine it in a greased glass bread pan with the bread cubes, tomatoes, and bacon. Then cover with more bread cubes.

Pour the egg, milk, and cheese mix over the bread and let soak for about 10 minutes. The top layer will help steam the tomatoes, but you can dice them up if you want. I’m not particularly a fan of tomatoes, so I like keeping them whole so I won’t accidentally spear one while I eat my portion. I added a few slices of butter here and there to get a nice crunchy top layer too. Finally, toss into the oven at 350 F for 35-40 minutes or until the top is browning. Add another sprinkle of cheese if you so desire!

And now you have an amazingly simple chicken bacon strata. 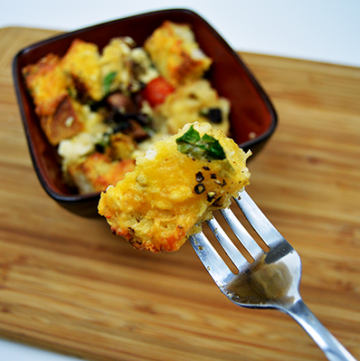 Keyword bacon, bread, cheese, chicken
Tried this recipe?Let us know how it was!