Then he slunk to the icebox.
He eyed the Whos’ feast.
He took the Who-Pudding.
He took… the Roast Beast.
He cleaned out that icebox as quick as a flash.
Why, that Grinch, he even took their last can of Who-Hash.

How the Grinch Stole Christmas (2000)

Jim Carey’s classic “How the Grinch Stole Christmas” has become a required movie to watch to officially kick-off the holidays in our household. I’ve been watching it for over 20 years now – in fact, at 10 years old, this movie was one of the last, if not THE VERY LAST, movie that my family bought on VHS tape. I’ll let you extrapolate my age from there.

Everyone wants the iconic Who Beast to be recreated from the movie – but what about the dish you can actually find in real life at Seuss Landing at Universal Studios Orlando?

You can find “Who Hash” at the Green Eggs & Ham Cafe – where it is served in a souvenir can with a Who Hash label. Naturally, I kept the can my lunch came in for the last few years with the intention of recreating the dish for you Hungry People.

I figured the perfect time to recreate it was for Christmas – it is the yummiest dish to serve for breakfast after being robbed by the Grinch!

Plus, TikTok has been requesting a lot of fictional feasts lately, so I figured now was even more perfect.

We’ll start with brined brisket
and of course salt and pepper
Plus pickling spices;
and beef broth for good measure

The base of our sauce could not be better
With the addition of whole mustard
cayenne,
and mountain aged cheddar

Then give it a whisk before moving ahead
to make tater tots,
that will keep our Whos fed

We’ll bake the tots until they are crispy
Meanwhile,
we can chop up our baked briskey

Then its time, to combine ingredients together
Before baking it once more to complete our endeavor

If this Christmas your heart is too small
This dish will bring cheer to one and to all
And don’t forget, if you are still here
To follow the Starving Chef for more recipes, my dear

Ingredients for Who Hash

Based off the recipe that you can get at the Green Eggs & Ham Cafe, this is my take on their “Who Hash” but with added flavors for a Christmas-y twist!

You can absolutely brine your own brisket to make corned beef from scratch, but keep in mind this process can take up to 10 days for the perfect corned beef brisket. I am not going to cover brining the brisket in my recipe specifically, but you can find all you need to know about brining your own corned beef on Sweet and Savory Meals.

Every home chef should have a reliable meat thermometer to ensure their meats are perfectly cooked. Corned beef is best cooked to 150°F where it is still pink throughout and perfectly tender. Let the brisket rest so it holds on to as much of the juices as possible before you chop it up into bite size pieces.

Don’t want to use corned beef? I’m generally not a big corned beef eater myself – though this recipe definitely converted me. But if you don’t want to risk it for the brisket, chopped prosciutto can be swapped in for similar flavor. 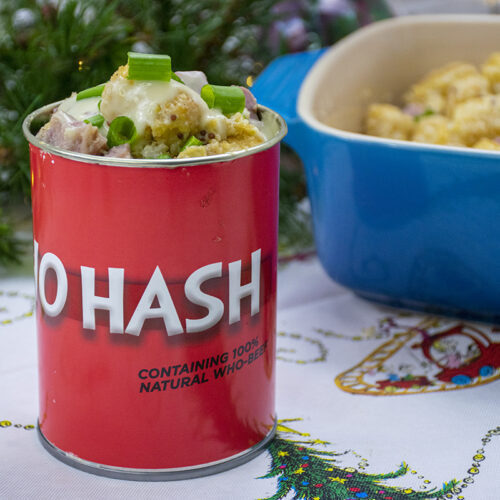 Copycat “Who Hash” from The Grinch

*For a more well-done corned beef, cook to 165°F (it will no longer be pink at this stage).
Keyword breakfast, brisket, cheese, hash browns, The Grinch Inspired
Tried this recipe?Let us know how it was!