A few weeks ago, the challenge was “black and white” – and because of all of the Valentine’s recipes I had on deck to post that week, this challenge was lost in the shuffle. But no worries, at (now over) 110 consecutive weeks, I still completed it within the time frame so therefore it counts!

Plus, the weekend before I went to Jungle Jim’s so I had a lot of new and unusual ingredients to play with – notably in this recipe, dragon fruit and forbidden rice, which both fit the bill for the black and white theme.

If you’ve never chopped open a dragon fruit before, you might be surprised to find they are pure white on the inside with tiny black seeds.

They are similar to a kiwi crossed with a melon in texture, with a slight melon-y taste that some compare to bubblegum. Another really cool thing about dragon fruit is that it is solid all the way through, which makes it super easy to cut. I used the same method I’d use to cut an avocado: made horizontal and vertical cuts to the skin then used a spoon to scoop it all out. That’s how I ended up with these neat looking ‘dragon fruit boats.’

I’d say it’s closer to a ‘generic fruitiness’ more than anything, where it’s subtly sweet and slightly crisp like watermelon. In this recipe, it pairs really well with the forbidden rice which has a much more ‘grain-y’ and savory flavor.

Because, of course, I love playing with sweet and savory flavors, I decided to toss some shrimp in a light orange marinade. I made a simple marinade of orange juice and a spicy honey (that I LOVE) and a touch of lime.

The rice is cooked similarly to a basmanti rice – the water turns black so it’s not hard to see when it’s ready because when a majority of the water has evaporated, you’re left with a purple-ish black-ish rice.

To help boost the flavor of this recipe, once I cooked the shrimp, I let the remaining marinade cook down until it was syrupy then I stirred it into the rice along with the shrimp and dragon fruit.

It may sound like an unusual combination, but I promise, it was strangely delicious and left me craving more! I ate all the leftover dragon fruit for breakfast the next day, and actually enjoyed the leftover rice and shrimp cold! It made for a great refreshing lunch. 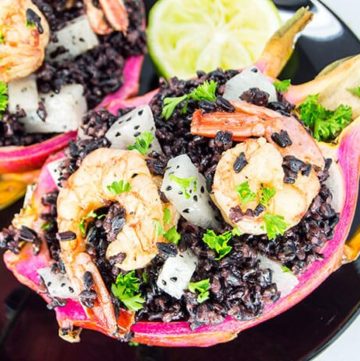 Keyword dragon fruit, honey, rice, shrimp
Tried this recipe?Let us know how it was!