Summer has drawn to an end, which means it’s harvest time! Last weekend, I decided to take down my garden, and got a reasonable harvest. For my first ever garden, it was a fun little experiment that resulted in dozens of eggplants, tomatoes, and peppers.

So now, I’ve been looking for new recipes to make with the vegetables I grew from seed – tonight’s dinner: Eggplant Parmesan!

Nearly all the main components of this dish I grew myself, but I did have to rely on store bought items like breadcrumbs, tomato sauce, and parmesan cheese. To start, cut the eggplant into one and a half to two inch thick slices and let it dry for at least one hour. I placed mine between paper towels and placed a heavy plate on top to speed up the process.

While the eggplant slices were drying, I made a quick sauce from my fresh picked cherry tomatoes, peppers, and parsley. I also added a generous amount of hot paprika, garlic and onions for an added burst of flavor.

Simmer the pureed peppers and tomatoes until the liquid begins to separate and evaporate from the mixture. When the liquid has reduced, add the tomato sauce and stir until the sauce is smooth.

I let my sauce simmer over a medium low heat while I prepared the eggplant. Just be sure to stir it every so often so it doesn’t stick to the bottom of the pan and risk burning the sauce!

While frying the eggplant, taste the tomato sauce and adjust the seasoning as desired. Because I used cherry tomatoes, my sauce didn’t need much sugar. You can tweak your sauce to your personal taste, but I definitely prefer my sauces a tad on the sweet side.

Arrange the fried eggplants on a baking sheet and top each slice with tomato sauce and Parmesan cheese.

Bake the eggplants for fifteen to twenty minutes, or until the cheese has melted and the sauce has thickened. I served my eggplant parmigiana on a bed of fettuccine noodles, with more sauce to boost flavor.

Eggplant Parmesan is one of my dad’s favorite dishes – he practically begged me to bring him some once he saw I was making it, even though I live on the other side of our state. Luckily for him, I had enough leftovers to save him a slice, and then actually drove back to my hometown to give him some! I can attest this dish can be reheated within a week of making it, and will still be just as delicious! 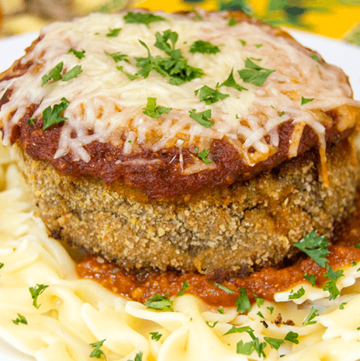 Keyword eggplant, Parmesan
Tried this recipe?Let us know how it was!