House Lannister is rife with unpleasantry – but as we all know, a Lannister always pays his debts.

If you aren’t caught up on the most recent season of Game of Thrones – BE WARNED!! THERE’S GONNA BE BIG OL’ SPOILERS IN THIS POST!! Don’t say I didn’t warn you!

The Lannisters of Casterly Rock have always had a taste for finer things. As the richest family in Westeros – or should I say formerly richest – no expense was spared on the finest of food and drink for the royal family. Even the boar that killed Robert Baratheon, Cersei’s first husband, was prepared for a delicious feast.

But now, money is short – if not dried up entirely, like the goldmines beneath Casterly Rock, the source of the Lannister’s weath. And of course this means that the people of King’s Landing have little food as resources to sustain the city crumble around them.

But not like Cersei cares. She would rather the entire city starve to death while she dined on roast beef and smashed potatoes if it meant she’d get her way.

This golden roast is encrusted in horseradish and honey mustard glaze colored with tumeric and saffron threads – the most expensive spice not only in Westeros, but the real world too.

In the kitchens of the Red Keep, the beef would have been roasted in clay ovens before being transported to the Great Hall – or to Maegor’s Holdfast, where Cersei is surely doing most of her plotting to take over the Seven Kingdoms.

Were Joffery alive, he would likely have enjoyed the roast served directly on the Iron Throne – or he would have ordered it to be stuffed down the throat of the nearest fool who disobeyed him. Either way, it’s being enjoyed – by someone.

PRO TIP: Roast your beef for 20 mins per pound. 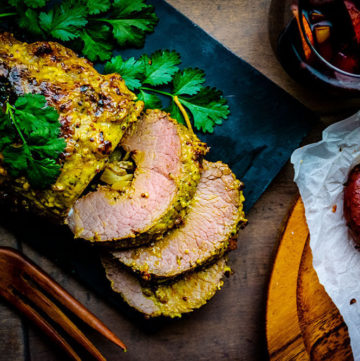 Keyword beef, Game of Thrones, horseradish, mustard
Tried this recipe?Let us know how it was!