Welcome folks to the very first READER SUGGESTION RECIPE! So what if that reader was my mom. She deserves the first one for putting up with me for the last 24 years. I have some other reader suggestions saved up and will try to make and post within 2 weeks of choosing the recipe. I occasionally hold contests on my Facebook page for these recipe suggestions, so please, like my page and leave me a recipe you’d like to see made!

I’ve never had paella, that I can recall, until the night I made this! It’s the perfect recipe to use up all of the leftovers in your fridge and cupboards too, since most of this I already had in my kitchen. Granted, I do keep my kitchen pretty well stocked, but I’m between paychecks at the moment and still paying back student loans (donations welcome) so I had to use what I had on hand.

Saffron is the most expensive spice there is and the kind I just happened to have came in at almost $14 for a half gram at a specialty grocery in Akron, Ohio. Even though I eyeballed my ‘generous pinch’ carefully as to not waste this golden spice, it’s completely worth every penny to use the real deal if you can get your hands on the stuff.

While your rice is cooking, heat a pan with oil over medium high heat. First add the chorizo, cut into 1 inch slices, and once browned slightly, add in the sliced chicken.

Set the cooked chicken and chorizo aside then add another tablespoon of oil to the same pan and toss in the peppers and onions.

Deglaze the pan with a splash of cooking sherry and then let the moisture evaporate.

At this point your rice should be pretty close to being done. The secret to the perfect paella is achieving a perfectly caramelized layer of rice that’s still soft but with a slight crunch.

When most of the sherry has evaporated, reduce the heat to medium-low and add the tomatoes and herbs.

Then add in the rice and meat!

Use tongs to press in the shrimp and mussels, shell side down. Sprinkle the prosciutto on the top then pop into the oven for about 10 minutes, or until the shrimp is cooked and the mussels have opened.

And then just stare at your masterpiece for a while in awe of the deliciousness you are about to consume.

Eat with your eyes. Trust me, this is an important part of the process.

I served mine alongside some nice bread and garlic lemon butter, and it was fabulous.

Okay, last one! It’s just too good. Thanks for the suggestion, mom! 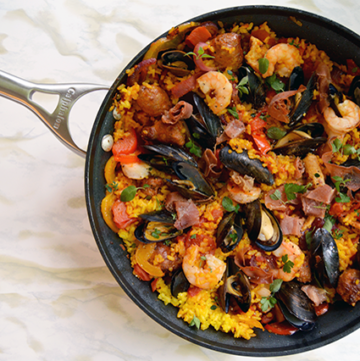 Keyword chicken, chorizo, rice, saffron, seafood
Tried this recipe?Let us know how it was!