Back in March, most of the world celebrated “Pi Day” – named for being 3/14, which of course is the start of the infamous, endless sequence of numbers known as π. But while everyone else chowed down on sweet and fruity pies, I of course had to use the day as an opportunity to make literal pizza pot pie – complete with a lattice top.

Because, I mean, it really is called pizza pie to begin with. And if you were to take the definition of “pie” literally (Pie: /pī/ “A baked dish of fruit, or meat and vegetables, typically with a top and base of pastry”) then pizzas by themselves qualify on a “base of pastry”, let alone adding in all the lattice work which is optional anyways – would that make calzones more qualified as pies, if it were though?

The whole thing was then brushed with garlic butter (because every pizza is better with more garlic!) and baked until perfectly golden brown. Once the pie has set for a bit, you should be able to cut out the pieces and eat them just like extra thick slices of pizza! 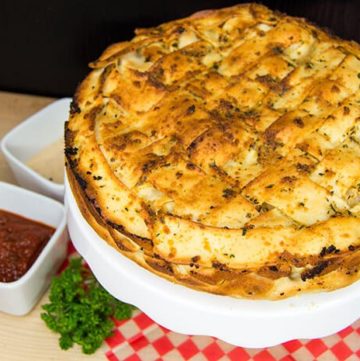 Keyword cheese, dough, mozzarella, pizza
Tried this recipe?Let us know how it was!