Some nights you crave waffles. Some nights you crave s’mores. And some nights, you crave both! That’s the position I found myself in a few nights ago, at least. But it also just so happened we didn’t exactly have any of the ingredients for waffles and barely the right s’mores essentials. So I had to get creative.

Surprisingly, no waffle mix was no problem. And subbing in mini chocolate chips and graham cracker crumbs helped hit all the s’more flavors. Marshmallow fluff helped to hold everything together.

For my s’more waffles, I flattened canned biscuit dough and pressed mini chocolate chips in the center of each. Then I folded the dough around marshmallows in the center and sealed the edges.

After that, it’s just a matter of popping the stuffed biscuits into a preheated waffle iron and cook for about 4-6 minutes, until the biscuit is golden brown. It’s likely that the marshmallow will evaporate out of the center, leaving a sweet and crispy center.

I stacked my waffles an used a stick and some marshmallow fluff to help keep it all together. For an added punch of s’more flavors, I sprinkled on crushed graham crackers. What I love about these waffles is that you can get away with eating them as breakfast OR dessert! 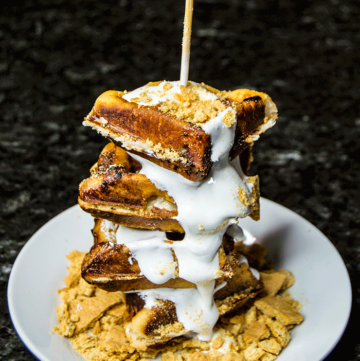 S’more Waffles on a Stick

Keyword chocolate, marshmallows, s’mores, waffles
Tried this recipe?Let us know how it was!