Ramsay Bolton is arguably one of the most evil people in all of Westeros – known not only for his cunningness on the battlefield, but also for the mind-flaying games he plays with his victims.

If you aren’t caught up on the most recent season of game of thrones – be warned! There may be some mild spoilers in this post!!

Now I’m not saying that Theon didn’t deserve a littleeeeee bit of torture for being an insufferable PITA for the first few seasons of Game of Thrones – but flaying off his *ahem* ‘favorite toy’ is a low blow, even for Game of Thrones torture standards.

For this recipe, we’ll be flaying off a bit of Theon for ourselves and one-uping Ramsay’s pork sausage with brats of our own.

Braided in flaky pastry that you can peel off piece by piece – or take the whole thing for yourself and dip it in bloody BBQ sauce. 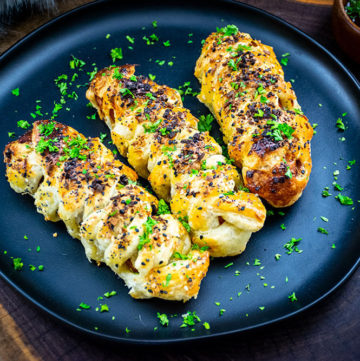 Keyword Game of Thrones, puff pastry, sausage
Tried this recipe?Let us know how it was!