So winter decided to show up. After extended mild weather in Northen Ohio, old man winter has finally reared his ugly old head. I for one am certainly not looking forward to the snow storm predicted for the weekend. Despite this, I plan on fighting the cold in the best way I know how: WITH SOUP.

Few things cut through a cold winter night like a warm and hearty chowder. And not just any chowder – a bacon and scallop chowder. My boyfriend thoroughly enjoys most of my recipes, but this one left him craving more since he not only ate the leftover made for his lunch the next day, but mine as well.

This soup is definitely hearty, filled with chunks of potatoes, onions and mushrooms but also has a delicate tang found in the wine and lemon juice. Of course, no homestyle soup is complete without a generous topping of mozzarella cheese!

Begin by browning the potatoes until they are softened, then add the onions.

When the onions are becoming translucent, add the mushrooms, herbs, and corn. Personally, I love the sweetness that corn brings to soup, so I always opt to add extra.

Use the wine to deglaze the pan, then add the water and cream cheese. The water is important in this step because it prevents the cream cheese from sticking to the bottom of the pan and burning; and also, water helps turn the cream sauce into a saucier consistency.

I also tend to enjoy soups that not only warm you from the inside but also pack a considerable punch to clear and stuffy sinuses as well. I love using spicy Hungarian paprika in my recipes, but cayenne pepper or red pepper flakes will also do the trick! If you like a milder soup, regular paprika will also work wonders.

Let the soup simmer for a few minutes. Cut the heat then add the heavy cream and stir it in until just combined. If you like your soup to be extra creamy, feel free to blend the soup until smooth – just be careful about how you do it. I’ve blended my soup in a blender, and let me be the one to tell you, soup-splosions can happen!! I actually didn’t blend this recipe, but if you are going to, now is the time to do it.

In a separate skillet, melt the butter and add the scallops. Take care not to place the scallops too close together in the skillet, or else the scallops will steam each other and not brown properly. This will result in a chewy scallop and that’s just not okay!

When the scallops are done browning, fry the bacon. Add a few crumbles of the bacon to the scallop soup, but leave some to garnish with. Who doesn’t love a little bit of extra bacon on top?

Hello to readers who found me in Mimi Vanderhaven! Don’t forget you can also find me on Facebook to keep up to date with recipes between issues. 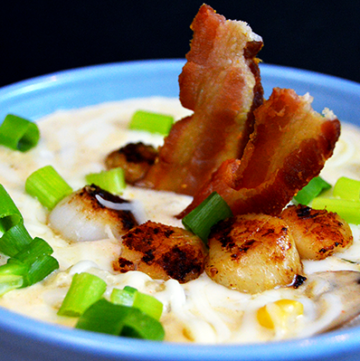 Keyword bacon, scallops, soup
Tried this recipe?Let us know how it was!