“What are you doing with all those books anyway?” Ron asked.
“Just trying to decide which ones to take with us,” said Hermione. When we’re looking for the Horcruxes.”
“Oh, of course,” said Ron, clapping a hand to his forehead. “I forgot we’ll be hunting down Voldemort in a mobile library.”

– Harry Potter and the Deathly Hallows

If you aren’t caught up on the Harry Potter series (and lets be honest, why are you here if you haven’t?) be warned there may be mild spoilers throughout this post! The Deathly Hallows represent the three super powerful magical objects that when combined, the holder can conquer Death.

Harry Potter is the only known wizard to have ever been officially the owner of all three hallows, though never at the same time, and I’d like to think after the Battle for Hogwarts and the defeat of Voldemort that the hallows took on a new meaning – hope for the future of the wizarding world. These cookies help represent the overcoming of death, as the witches and wizards who fought hard to save the world from Voldemort, and many lost their lives doing so.

I’m hopeful that the deathly hallows will make an appearance in the next Fantastic Beasts and Where to Find Them movie, as Dumbledore and Grindelwald sought them out together. In fact, I’d be more surprised if the Elderwand doesn’t take a more prominent role in one of the next four Fantastic Beasts movies! 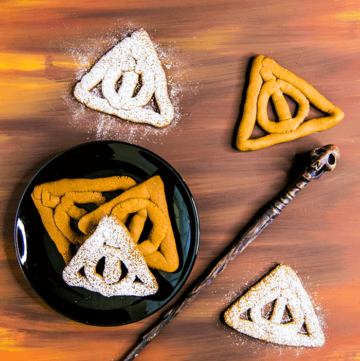 Keyword graham crackers, Harry Potter, molasses
Tried this recipe?Let us know how it was!