That’s right people. These eggs are crazy. Crazy Spicy! Trust me, if you’re an allergy sufferer, you’ll want to try this recipe – it’s guaranteed to clear your sinuses and leave beads of sweat on your forehead. Not convinced? Just ask the habanero I tossed into the sofrito!

This week’s challenge was Cuban, so I was excited to finally get to turn up the heat!

Stir until onion is beginning to become translucent. Here’s where contact wearers (and just about everyone else) need beware. If you’ve never cut a spicy pepper before with your bare hands then absentmindedly rubbed your eye hours later only to scream in agony because apparently spiciness doesn’t just wash off…well, I hope that horror never befalls you.

This adorable little habanero I cut while my hand was covered in a baggie. I’ve learned that lesson one to many times, and surely will learn it again, BUT NOT TODAY!

Stir in the tomatoes and reduce the heat just to about medium. I used cherry tomatoes because I actually HATE tomatoes, while my boyfriend, Nick, LOVES them. So as a compromise, I just leave the chunks of tomato large enough so I can pick them out of my own dish.

Once the tomatoes are beginning to lose their moisture, separate the sofrito into two ramekins and preheat the oven to 375 F.

Cover the pepper mix with some cheese, if you like.

Then carefully crack two eggs into each ramekin.

And toss a couple slices of butter on top.

Cook in the oven for about 15 minutes, then add some shredded cheese to the tops, then continue to cook until the egg whites are completely set. Mine took about 17 minutes and resulted in perfect soft centered eggs.

I’d be lying if I said that this big bubbly bit wasn’t my favorite part. So satisfying to poke with a fork.

Garnish with green onion and a sprinkle of spicy paprika.

Be careful when serving to let the ramekins cool significantly – and remind the eater that it may be very hot! 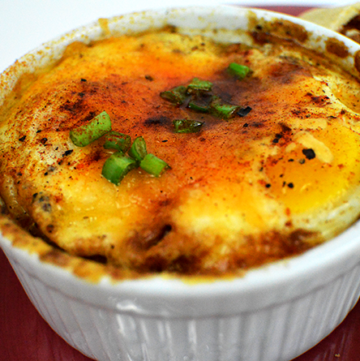 Keyword breakfast, eggs, spicy
Tried this recipe?Let us know how it was!