Four. Ingredients. That’s essentially all you need for these incredibly easy shrimp and chorizo bites. It’s the best (and cheapest) of the land and sea – and it can be served many ways.

I only had bamboo skewers at my disposal, otherwise I would have used cocktail toothpicks and served them individually. But sometimes, you just need to improvise, and that’s what I’m best at!

Full disclosure: I totally wasn’t thinking straight when I bought my ingredients. I got cooked shrimp and chorizo, so I guess, in theory, this dish can be made and served without cooking. However, I did end up making this dish two nights in a row, once for my anniversary dinner, and once for dinner with my parents. At my parents, I used raw shrimp and chorizo, and it worked much better. Either method works – and both methods are delicious.

Marinade the shrimp for 30 minutes at room temperature in the white wine, garlic, and oil.

Using your skewer option of choice, first skewer some chorizo, then some shrimp so it wraps around the chorizo with the natural shape of its body.

Put under the broiler for 2-3 minutes (3-4 minutes if using raw) and cook until red and sizzling! Serve alongside some filet mignon stuffed with bacon scallop filling and a nice hasselback potato, and enjoy. 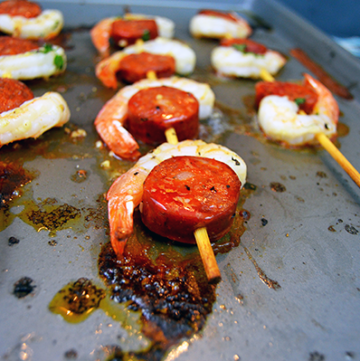 Keyword sausage, shrimp
Tried this recipe?Let us know how it was!