Today is officially the first day of fall – that means soup season!! We don’t frequently dine on soup in our household, but when we do, it’s always delicious and most often based on a fictional character.

And now that it’s finally fall, the only thing that truly works against the cold is a solid soup. Fortunately, this simple recipe for beer cheese soup will warm you from the inside out. Most importantly, it’s ready in minutes!

A spicy soup is always a good soup, in my opinion, so I used pepperjack and buffalo flavored cheeses and then mellowed down the spiciness with heavy whipping cream. I decided to use Jackie O’s chomolugma honey nut brown ale for my beer base as well, not only because it adds a rich, almost nutty taste to the soup, but also because it comes from the greatest place on Earth: Athens, Ohio. You can use whatever kind of beer you prefer, however.

Begin by bringing your cheeses to room temperature, then cutting the cheese (ha!) into evenly sized cubes.

Then in a soup pan, melt some butter over medium high heat. Add the celery, carrots, peas, garlic, and shallot to the pan. Stir occasionally as the pieces being to brown.

Next gently stir in the flour until all of the vegetables are coated. Then quickly add the chicken broth and stir until the flour has dissolved.

Let the soup base simmer for about 5 minutes, then add the heavy whipping cream and cubed cheese. Stir for 2-3 minutes or until the cheese has completely melted into the soup. If the cheese is already at room temperature, it should melt fairly fast.

Once the cheese is completely stirred into the soup, add the can of beer slowly or else you’ll risk foaming over the top of the soup. Stir a few times then let simmer for about 5 minutes and reduce the heat to low.

The soup will thicken the longer it stands, so serve it right away with some focaccia bread croutons and freshly grated white cheddar cheese. 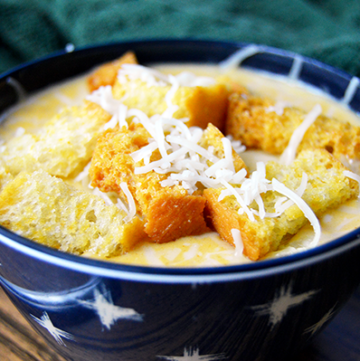 Keyword beer, cheese, spicy
Tried this recipe?Let us know how it was!